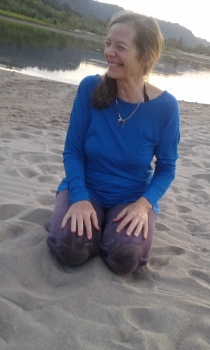 My figurative artwork explores the narrative of human feelings and expression on canvas, paper or clay. I am obsessed with discovering the nuanced meaning of body language and what that implies. I am also compelled to play with both plasticity and structure of the human form as an expression of my native flexibility coupled with a  childhood injury. My Muse often comes forth in a trance state while I work.

Both my  visual art and poetry often explores Eros, communication and feelings of closeness or distance as well as ecological themes. In my artwork I use the fluidity of impossibly shaped limbs while maintaining a sense of elegance. There is a narrative dream-like  quality in my artwork with water, landscape imagery or interior scenes. Both art and writing alternats between pattern and simplicity. The workings of the Inner Spirit are often implied. Zig zagging patterns and symbols function like glue that hold my compositions together much like jazz riffs in music.  I originally called my work Ancient/Modern given my early exposure to ancient World Art, however I think in many ways Dream-like Art fits the bill.

Bea Garth creates figurative, dream-like visionary narrative art and poetry. She focuses on complex inter-communication in landscape, water and interior settings. The daughter of two anthropologists in the Pacific Northwest, her work reflects her early exposure to Native American and World Art. In addition she became familiar with Walt Whitman and other great poets as a child. Her artwork and poetry often expresses her interest in both the Earth and Eros, psychology and metaphysics. Ms. Garth is driven to explore the structural dimensions of her art as a healing response to various hard knocks  she received as a child. She often exaggerates shoulders, hips, hands, feet and limbs. She employs color, sound, pattern and symbols for emotional, mythic and compositional purposes .

Ms. Garth won the 2016 9th Round for Painting in the international art magazine Art/Slant. Ms. Garth has been president of several artistic and poetic organizations, created and curated art and poetry events, and edited art/poetry publications in Eugene, Oregon and later in San Jose, CA. Recently she was the president of the Oregon Women’s Caucus for Art.  Currently she is restarting her art career in spite of family responsibilities back in San Jose.